About | According to National Lampoon’s “Deteriorata” one should, “Know thyself.  If you need help, call the FBI”

My first love has always been about writing.  I wrote my first story when I was in the Third grade.  It was a story about a combat pilot in World War Two.  A.  I’m not a pilot   B.  My Dad was only eight years old when World War II started. 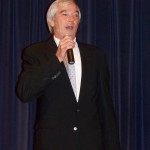 My teacher thought it rather cheeky that I wrote about something I knew nothing about, but I’ve never let that stop me.  I’ve since learned the error of my ways, kinda, mostly.  Let’s talk about something else.

My favorite thing about writing is that my characters do what they are told.  Now if I could just get my wife to…never mind. As far as a real job, I was an Air Traffic Controller/Flight Service Station Specialist.  I learned my trade in the United States Navy.  I was a Westpac sailor.  I’ve got a lot of stories.  Some of them I can even tell in mixed company.

I continue to work with other writers and editors in an effort to bring you, the reader, the best possible possible stories. One must hone their chops to keep current. I completed David Farland’s 318r class, Writing Science Fiction and Fantasy, last August. It is the same class he taught at BYU. I wrote Space Force (half of it anyway) during that class.  The story merges our burgeoning Space Force with the breakaway colonies of Inner Earth and on Mars to repel the Reptilian invasion of Earth.  Be watching for more news about it.

To stay up to date please fill out the form below!